THE SPIRIT: FOUND AT WALDO

As I wrote in my previous article Finding Waldo? I was not sure if I would find Waldo or not. A lot of things were up in the air, from the condition of my body, to my weak ankle, to the brand new fire burning in the center of the Waldo 100k race course.

As it turned out, I did find Waldo in the sense of finishing, but more than that, I found MY Waldo, when defined as uniqueness and passion and heart – or Spirit.

Halfway through our 7-hour drive the day before the race, we got confirmation that the race would indeed happen on an altered route that kept most of the course intact, only adding three miles and some amount of elevation gain. This seemed like a best-case scenario, and all runners are tremendously thankful to Craig Thornley and his crew for working what I’m sure was around the clock in the two days prior to the race to pull it off in an outwardly seamless fashion.

The scene at the Willamette Pass Ski Area Friday evening felt relaxed and organized, not chaotic like you might expect at races with lesser organizational aptitude when faced with a new forest fire on their course two days before race start. Not many people were around when we picked up our packets, which included Moeben running skirts and leg sleeves and Injinji socks!

Amy and I and our hubbies hooked up with Randy Thorn and Joelle Vaught for a delicious all you can eat pre-race buffet pasta dinner inside the Willamette Ski Pass Lodge, and then it was time for the pre-race briefing.

I unearthed The Notebook from the car and we found a spot to sit on the steps. Joelle gave me a hard time, joking that I was the ONLY one at this race with such a notebook. I like to be prepared!

Craig explained the modified course, and we applauded the people who had spent time marking the course. Alan Abbs went over the sponsors, and Meghan Arboghast explained the awards and prizes, of which Waldo has several. Top runners would get prizes like cash and apparel and free Western States entries; and all finishers under 19 hours would receive a special finisher’s hat. But Waldo is unique for its “other” awards: the Wet Waldo outdoor gear prize for the top finisher to swim in six of the lakes, a cash prize to the first person to Find Waldo (summit Mount Fuji and sight Waldo Lake for the first time), and the Show Us Your Waldo free race entry award to the person who demonstrates the most, um, Waldo, which as far as I could tell meant making some sort of creative presentation or contribution to the race at each aid station, a subjective prize to be judged by aid station personnel. We were privileged to witness a good three to four times Melissa Berman showing her Waldo by donning a trampy wig/sunglasses/fishnet combo and performing at least a two minute routine of Lady Gaga’s “Bad Waldo,” as it were. I do believe she took home the Show Us Your Waldo prize at the end of the day, and she sure deserved it.

Melissa Berman seriously performed this Bad Waldo routine at every single aid station (and still beat me by 7 minutes):

I didn’t think much of the whole Show Us Your Waldo thing at the time, as the reigning Most Waldoy runner gave his presentation about the history of the award and encouraged everyone to Show Your Waldo. He ran the race the next day in huaraches. You can be darn sure I WAS going to wear shoes and WAS NOT going to spend my energy performing Lady Gaga moves at every aid station, but I believe I Showed My Waldo mostly to myself by taking the starting line, and I know for sure that I Found Waldo on those cushy pine-needled trails. 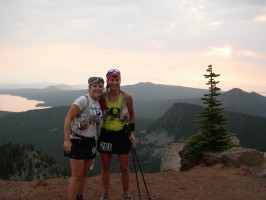 Amy (left) and I on the Mt. Fuji summit.

I set out to write a rock-by-root blabiddy-blah narrative race report. What I have realized, however, is that a traditional sort of race report just doesn’t do justice to the experience. As we trudged the final miles of Waldo, Amy and I were both feeling a little down. We had each decided that we would withdraw from the 100 miler (IMTUF 100, October 6) neither of us wanted to be signed up for and pace the other. Ha! Midnight was approaching. We were at 60+ miles. That’s a tough spot.

Anyone who has done an ultra knows that those tough miles are not the correct setting for making decisions or establishing goals. What we take away from those tough moments, and how they purpose us going forward, after the race, is where they prove their value.

I had just started to, rather reluctantly, ramp back up my miles in mid-July in a milquetoast effort at ‘training’ for Waldo. Just a week or two and not many miles in, I hurt my ankle while NOT running, and my training was reduced to four days a week of rowing and pushups and stuff. I did not run at all between July 28, and race day, August 18. It made me think about what was important. Whether or not I really wanted to run, like, at ALL. Spraining my ankle FOCUSED me. I realized that I really did want to run, to recover.

I made my theme for the race PATIENCE. There were times when I was pushing, not wanting to be kissing the cutoffs. Mostly, however, I had to remind myself of my condition, the point from which I had come in the last month, and the remaining weakness in my left side which left me vulnerable to new or re-injury. And to travel at that conservative pace was not always easy. It took patience…and self-awareness to know when I was at risk of pushing too hard. Legs buckling going downhill? Too hard. Slow down. Agonizing slowness. It’s okay. It’s a safe pace for where you are at. I don’t like where I’m at! Well, at least you are HERE. And not home on the COUCH. Alright, good job. Pick a solid line. Keep moving. You’ll get there. Patience.

My injury focused my attention on how badly I did want to complete Waldo and IMTUF – races I had already signed up for. I did not have that fire at Big Horn, last June. There, I had become complacent, having finished a couple other mountain 100s, and feeling that finishing was obvious. I knew my dad and sister were waiting for me 20 miles up the trail, but my demise came anyway. My inexplicable mental anguish overwhelmed any rational thought process regarding sentimentality or outward influences. I did not have the Spirit in my heart.

That Spirit I had lost before Big Horn is what this report is really about. At Waldo, I found my Spirit. More importantly than starting, certainly more importantly than finishing, the Waldoy-ness (yes, it’s a thing) I came away with after that race made my ankle injury probably the most valuable thing that has happened to my running, ever.

The Sprain, and the Finish…and The Interview – a Divine trifecta. A week after Waldo I interviewed the race director of the IMTUF 100, Jeremy Humphrey, who had just won Cascade Crest. He talked about the Spirit and about performing your best to honor the sacrifices of people who support your endeavors. His words resonated deeply with me, and I could feel my Spirit returning.

Waldo was special for so many moments: Seeing photographer Gary Elam on the course at mile 30, appreciating his delighted recognition and his smile. Being counseled and inspired so thoughtfully and gently by Meghan Arbogast at Twin Peaks. Spending the entire day with my training partner Amy, even though she easily could have finished much faster on her own. She was undertrained too, but she’s just an animal like that. Chatting with Craig Thornley at 12:15 am and watching him smile like it was Sunday afternoon on the beach. Learning that being slow doesn’t mean being weak. Honing my patience for 21 hours. Loving my husband and parents for their support. Reacquainting with my appreciation for the ABILITY to participate.

After finishing Waldo and then interviewing Jeremy , I realized I truly wanted to train for, start…and finish, IMTUF. And so, in the last six weeks, more than ever before, I have made the MOST of my training time and the opportunities afforded to me.

For various reasons, IMTUF will be only the second of my 100 mile races that my dad will be present at. He was at my BigHorn DNF back in June (2012), but pacing was not an option there because he was tapering for an Ironman the week after. So, I’m pretty stoked he will be at this one, on the course, at the aid stations. And at the finish. I really want him to see me finish this one.

My dad will not be one of my three pacers, which may seem odd, but I think really, this is okay. Special moments are bound to happen, but they cannot be planned. Having him run with me for a significant section seems…orchestrated. Too much pressure. He is pacing my friend Sam, which seems just right.

In one week, we toe the line. There is a really strong group of 32 people signed up for IMTUF, meaning even if I have a really good race, I’ll still be back there, hours behind the frontrunners, running my race at my pace. But you can bet I’ll be doing it with the Spirit Found at Waldo.